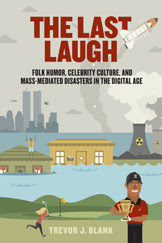 "Widely publicized in mass media worldwide, high-profile tragedies and celebrity scandals—the untimely deaths of Michael Jackson and Princess Diana, the embarrassing affairs of Tiger Woods and President Clinton, the 9/11 attacks or the Challenger space shuttle explosion—often provoke nervous laughter and black humor. If in the past this snarky folklore may have been shared among friends and uttered behind closed doors, today the Internet’s ubiquity and instant interactivity propels such humor across a much more extensive and digitally mediated discursive space. New media not only let more people “in on the joke,” but they have also become the “go-to” formats for engaging in symbolic interaction, especially in times of anxiety or emotional suppression, by providing users an expansive forum for humorous, combative, or intellectual communication, including jokes that cross the line of propriety and good taste.
Moving through engaging case studies of Internet-derived humor about momentous disasters in recent American popular culture and history, The Last Laugh chronicles how and why new media have become a predominant means of vernacular expression. Trevor J. Blank argues that computer-mediated communication has helped to compensate for users’ sense of physical detachment in the “real” world, while generating newly meaningful and dynamic opportunities for the creation and dissemination of folklore. Drawing together recent developments in new media studies with the analytical tools of folklore studies, he makes a strong case for the significance to contemporary folklore of technologically driven trends in folk and mass culture."

Trevor J. Blank & Robert Glenn Howard (eds.): Tradition in the 21st Century. Locating the Role of the Past in the Present, Utah State University, 2013.

"In Tradition in the Twenty-First Century, nine diverse contributors explore the role of tradition in contemporary folkloristics. For more than a century, folklorists have been interested in locating sources of tradition and accounting for the conceptual boundaries of tradition, but in the modern era, expanded means of communication, research, and travel, along with globalized cultural and economic interdependence, have complicated these pursuits. Tradition is thoroughly embedded in both modern life and at the center of folklore studies, and a modern understanding of tradition cannot be fully realized without a thoughtful consideration of the past's role in shaping the present. 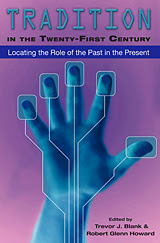 Emphasizing how tradition adapts, survives, thrives, and either mutates or remains stable in today's modern world, the contributors pay specific attention to how traditions now resist or expedite dissemination and adoption by individuals and communities. This complex and intimate portrayal of tradition in the twenty-first century offers a comprehensive overview of the folkloristic and popular conceptualizations of tradition from the past to the present and presents a thoughtful assessment and projection of how "tradition" will fare in years to come. The book will be useful to advanced undergraduate or graduate courses in folklore and will contribute significantly to the scholarly literature on tradition within the folklore discipline."
http://www.usu.edu/usupress/books/index.cfm?isbn=8992

Etnoszkóp was started by students graduated from or studying at the Institute of Ethnography and Folklore at Eötvös Loránd University (Budapest), also involving assistant professors, PhD students, and students from some other universities. The journal’s goal is to support textual folkloristics, historical folkloristics, and contemporary folkloristics. The journal provides an opportunity for students from all universities and also for young researchers. Etnoszkóp is a dynamic, multifaceted journal that deals with the above-mentioned areas from different perspectives. It publishes papers, recent book reviews about the most important local and international bibliographies, translations, and interviews with acknowledged researchers.